So now that the inconsequential election is over, let’s talk about more important things, such as Madagascar 2. I headed to see a preview of the movie last weekend (pre-Obama) and was unimpressed. You may be thinking, What does it take to get a good review around here, huh? Well, a good movie, to start. Where have those been lately? Not that I was banking on Madagascar 2 being the hit movie of the fall but still.

I’m starting to wonder why they make sequels to animated movies anyway (besides the obvious profit answer since kids would watch movies colored in with crayons and saliva—they don’t know the difference!); have you ever seen an animated sequel that wasn’t completely lame? (You know, when you were a kid and stuff; I do realize I’m the only adult who gets genuinely excited about cartoons.) Nowadays, that stuff has been heading straight to DVD and that’s where Madagascar 2 belongs.

Now, some parts were funny. But anything that got a laugh was a continued punchline, banking on the hilarity of the first movie. There were token made-for-grown-up jokes but those seemed forced this time around. When I saw the original, it seemed pretty unique and hilarious at the time, but the storyline to the second was simply repetitive. The main group of animals (a giraffe, lion, zebra, and hippo) raised in a Manhattan zoo, try to get back to New York from Madagascar and end up in Alex the Lion’s birthplace in Africa. The animals have trouble relating at first, but eventually embrace their ancestry and family members, and get used to a more authentic lifestyle.

Kids will love it, I’m sure. The animation was “improved” this time around, but there is something weird to me about cartoon animals living inside a realistically-rendered world. Is there a point when cartoons get too real, taking some of the fun out of it?

Another gripe I had that kids would never notice was the actors’ voices and cross-over stereotypes. For example, the female hippo is voiced by Jada Pinkett Smith, and when she is surrounded by hippo “girlfriends,” there is definitely a racialized element. When she meets a male hippo for the first time (since other hippos are lacking in New York, but not in Africa), he has a deep, husky voice (done by Will i Am), and he spends their time commenting on how chunky and hefty she is; he says he likes her because she’s the biggest hippo he’s seen (and he says this with an R&B song). Hm, on one hand, congratulations on backhandedly implying it’s OK to be yourself but what’s with the racialization of the hippo group?

The giraffe is named Melman and is an awkward hypochondriac voiced by David Scwimmer. The old (Russian? Jewish? Russian Jew?) lady from the first one comes back and angrily beats everyone up (it was as awkward as it sounds). The two monkeys have uptight British accents—go figure. Chris Rock voices the zebra, Marty, and his main story line involves his lack of identity when he meets all his zebra peers—they all talk/act/jump exactly like him, which is confusing because Marty was an individual in New York. There is even a whole joke about how Alex the Lion, his best friend, can’t tell him apart from the other zebras because they all look the same to Alex. Eek. When they finally resolve this issue, Alex tells him he now knows the difference: “They’re white with black stripes and you’re black with white stripes.” Oh OK, that makes sense.

I guess when you’re bringing in voices that we know in real life, it’s hard not to play into the stereotypes, but aren’t cartoons for creating a whole new reality? In trying to recreate success in the second film, the writers fell into way too many cliche traps. But, probably like Beverly Hills Chihuahua, it was a good hour-and-a-half of escapism that, like I said, would’ve better served children on DVD. 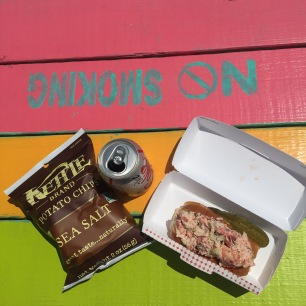